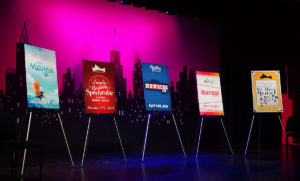 The Mauldin Cultural Center has revealed its 2020-2021 Theatre Season, which runs from September 2020 to August 2021. The season includes two Mauldin Youth Theatre productions, two musical revues, and one Mauldin Theatre Company production. The lineup was shared during a Reveal Show performance in February with songs from each production. The show also included a bonus performance of “Tomorrow” sung by Aislynn St. Clair, who plays the titular character in the Mauldin Youth Theatre’s spring 2020 production of Annie, JR.

The Mauldin Youth Theatre’s fall production will be Disney’s Moana, JR. from November 6-15, 2020, followed by their spring show Newsies, JR. from April 9-25, 2021. The Mauldin Theatre Company will have two musical revues and a theatrical production during the next season including: Family Christmas Spectacular holiday variety concert from December 4-13, 2020; In The Mood, a big band musical revue from August 6-15, 2021; and Freaky Friday: the Musical from May 7-16, 2021.

Tickets will be available in the fall of 2020 for next season’s productions, but tickets for this season’s remaining shows are available online at mauldinculturalcenter.org, including Annie, JR. (March 20-29); the Mauldin Theatre Company’s Seussical (May 15-24); and Let the Good Times Roll (August 7-16), a musical revue of music from the 50’s, 60’s, and 70’s.

The Mauldin Youth Theatre and the Mauldin Theatre Company both hold auditions for anyone in the community who is interested, regardless of experience. More information about the Cultural Center’s programs can be found online at mauldinculturalcenter.org.

Photos of the 2020-2021 Reveal Show can be found on the Cultural Center’s Facebook page.