June Crawley Recognized by City Council for Tenure with City 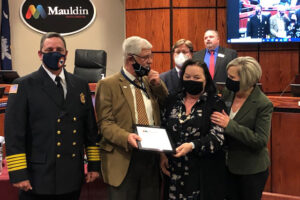 Throughout her career, Crawley has written grants that brought in over $500,000 to the department. She also helped begin the fire prevention program, which continues today. Crawley says that she has always felt as if the firefighters are a huge part of her family. Whether it is as a friend, sister, or mother figure, Crawley has always welcomed them and been there to help. 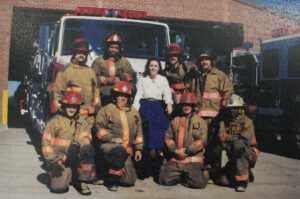 “I started my career as a firefighter with Mauldin Fire Department in 1998 and this is when I first met Mrs. June Crawley,” said Chief Brian McHone. “She was always helpful, and we worked together on different events, but I did not know how important her role in this department was until I began working through the ranks. After being a lieutenant and then promoted to shift captain, she then became more crucial in helping day to day operations run smoothly from the administrative side of things. Working closely with June, she has proved time and again what an asset she is to this city and department with her time and talents. I have really learned so much from her, especially during my service as interim fire chief, and she continues to share her knowledge and experience on administrative tasks as I now have been promoted to Fire Chief. I do not know what myself and this department will do without her, she will be truly missed.”

The City of Mauldin appreciates the great work that June Crawley has done in service to our community and wish her a happy retirement.