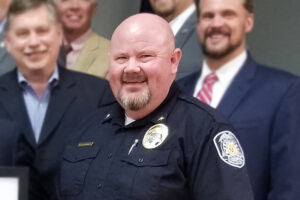 After a 15-year tenure as the City of Mauldin’s Chief of Police, Mitchell B. Turner, has announced his retirement effective April 2, 2021.  “I am thankful for the numerous opportunities the City of Mauldin has given me, and for the level of support our department has received from our community,” said Turner.  “I’m looking forward to focusing on my wellbeing, spending more time with my family, and exploring new opportunities in life,” Turner added.

“Chief Turner’s commitment to the City of Mauldin and the Mauldin Police Department has been admirable,” said Mayor Terry Merritt. “He has worked hard to make sure Mauldin continues to be a great place to live and has been a steady force in keeping our City safe,” Mayor Merritt added.

Chief Turner is a graduate of Coker University and holds a Bachelor of Arts Degree in Sociology/Criminology. He is a graduate of the South Carolina Criminal Justice Academy (Basic 307) and the FBI Command College.

Shortly after his arrival in Mauldin, Chief Turner decided to seek accreditation through Commission on Accreditation for Law Enforcement Agencies (CALEA) and South Carolina Law Enforcement Accreditation (SCLEA) to ensure that the Department was functioning according to law enforcement best practices and standards. Mauldin was first awarded CALEA accreditation in March 2012 and subsequently accredited by SCLEA in December 2013. With a passion for the youth in our community, Chief Turner started the Mauldin Police Youth Academy. Over the past 14 years, boys and girls ages 11-14 have been able to experience policing in a proactive setting, building partnerships with future leaders.  “Chief Turner’s public safety experience and commitment to the community served the Police Department and the City well,” said City Administrator Brandon Madden.  “The City wishes him the best in his future pursuits,” added Madden.

“Chief Turner has been integral in the City’s public safety efforts and leading the Police Department,” said Chair of the City Public Safety Committee Carol King.  “I congratulate him on all his successes in public service and wish him the best in the future,” added Councilperson King.