6 Mauldin mayors reflect on the path from town to city 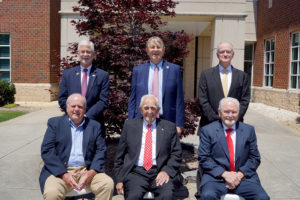 The Greenville Journal joined the City of Mauldin for a photo-op with our six living mayors to reflect on more than 40 years of shared history and to celebrate former mayor L.S. Green’s 100th birthday.
Green, who turned 100 on Feb. 29, came to the Mauldin area at age 8. After serving in World War II, he settled in Mauldin and has remained a resident since.
“When I came out of the service [following WWII], my daddy bought some property over on Fowler Circle,” Green said. “I built my house in 1955.”
Green went on to own property, including L.S. Green Plaza on East Butler Road in Mauldin, served on Mauldin City Council and eventually became the city’s mayor.
.
The Greenville Journal spoke with each of the six mayors about their time in office. Wayne Crick, L.S. Green, R.C. Jones, Don Godbey, Dennis Raines, and current mayor Terry Merritt shared how the city has grown throughout the years, and where they see the future headed.
.
Click here to read the full article by the Greenville Journal.