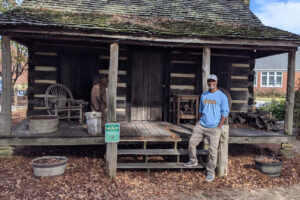 The cabin that Deas’ ice cream shop occupies is in a quiet, gardenlike spot on the Mauldin Cultural Center’s campus. Since being moved to the city from Camp Old Indian in 2009, the Gosnell Cabin has sat relatively unused year-round. Now, it serves as the home of Pop’s Cabin Creamery.

Deas named the shop after the popular ice cream shop that his grandfather-in-law, Pop Dorsey, owned in Marion, South Carolina.

“My wife’s grandfather owned a small ice cream shop in Marion,” he said. “There was nothing to it. [It] was just a little shack, but you wouldn’t believe the amount of people who came to it just to get ice cream and hand-sliced cheese and all sorts of meats. I was always impressed every time I went, because he was just a part of the fabric of that community. People loved walking to that store, getting ice cream.”

The creamery utilizes the front windows on the cabin as ordering stations, with an order pick-up area where the front door was. An open seating area with tables, chairs, and umbrellas is located in front of the cabin. Pop’s Cabin Creamery features ice cream, snow cones, milkshakes, and more.