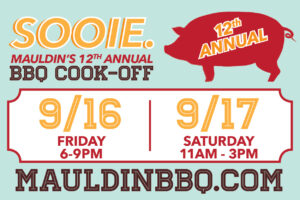 Produced by the City of Mauldin, SOOIE., Mauldin’s 12th Annual BBQ Festival showcases the heritage of the community through food and music. Hosted at the Mauldin Cultural Center’s Outdoor Amphitheater, the festival features more than 20 Cookers from all over the Southeast competing in a BBQ Cook-off judged by the South Carolina Barbeque Association (SCBA). Paired with live music and family fun, this can’t-miss festival is the perfect pig-out. Entry and parking are free! SOOIE. will take place on Friday, September 16, 2022, 6-9 p.m. and Saturday, September 17, 2022, 11 a.m. – 3 p.m.

The festival opens Friday night with our Anything Butt competition, where participating cookers serve anything BUTT their BBQ to pique your tastebuds. Food Tickets are $1 each, and food items cost between 2-6 tickets. Sliders, grilled chicken, smoked cobbler—the only way to know what’s cooking is to come try it for yourself. These food items will be judged by a guest panel, with special awards given to the winners during Saturday’s ceremony.

Saturday features the main event, a BBQ Cook-off competition with a panel of certified BBQ Tasters from the SCBA. For $10, guests can get a Tasting Pass which will get them ten tastings of delicious BBQ. The public will also have a chance to cast their vote for the best BBQ and the winner of the Gabe Hunter People’s Choice Award. 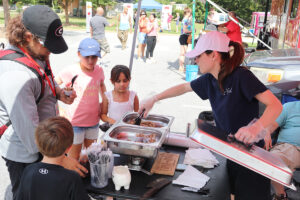 Friday will feature the music of Song Band, a collective of talented musicians well-versed in jazz, pop, blues, soul, rock, and gospel. Saturday, DJ T Thunder will take the stage to provide fun music and announcements throughout the main competition. A Kids Zone will offer free activities throughout the weekend, including inflatables, face painting, balloon twisting, and fun games with the Greenville Swamp Rabbits. Drink and dessert vendors will be on site as well. Castillo Mobile Cigar Lounge will be at the event on Friday, and The Blood Connection will be on site Saturday accepting donations from 10 a.m. – 3 p.m. Blood donors will get a free Tasting Pass for Saturday’s event, as well as a $20 e-gift card.

Last year, there were five categories to compete in: the BBQ Cook-off; a Ribs competition; a Brisket contest; Anything Butt (Sweet and Savory); and People’s Choice. In Friday’s Anything Butt competition, team One Eyed Pig won in the Sweet category with their brownie cheesecake. In Savory, the winner was team Swine O’s with their smoked brisket beef stew. 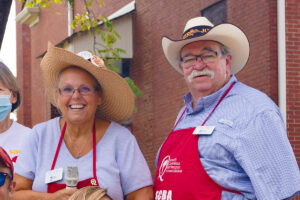 In 2021, Mayor Terry Merritt made a proclamation in honor of former Master Judge and Marshal Tony Lindsey, who passed away earlier that year. Tony, along with his wife Judi, had presided over the Mauldin competition since its inception. The Mayor’s proclamation announced the creation of a new award in Tony’s honor for the winner of the best brisket, as Tony championed adding brisket to the SOOIE. competition. The Cultural Center team and the City of Mauldin are honored to continue Tony’s legacy of celebrating barbeque and community through this competition.

The Mauldin Cultural Center hosts many events throughout the year, including SOOIE. Our next event is the Mauldin Theatre Company’s original concert show I Wanna Rock! which will feature music of the ‘80s performed by the best singers in the Upstate accompanied by a live band. This event will be September 23 – October 2, 2022 – tickets are available online at onthestage.com/mauldin-cultural-center.

Other upcoming events include the Mauldin Youth Theatre’s production of Once on This Island JR. from November 4-13; A December to Remember, including the annual Tree Lighting, Holiday Market, and more on December 1; and MTC’s production of A Christmas Carol with music by Alan Menken from December 2-11. For more information on the Mauldin Cultural Center’s events, visit mauldinculturalcenter.org.