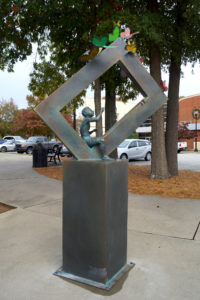 The Mauldin Cultural Center unveiled the latest addition to the Mauldin Public Art Trail on November 14th. The Mauldin Public Art Trail was established to beautify the community and support local South Carolina artists. Every year a new work is commissioned to fill one of the nine trail sites lining the perimeter of the Mauldin Cultural Center Outdoor Amphitheater. Artist Aldo Muzzarelli was chosen for 2019 to create a piece for the theme “Youth: Passion for Change.” This theme celebrates the youth as our future and a driving force behind positive change across the globe.

Muzzarelli is a Venezuelan-born artist who holds a Bachelor of Arts from the Central University of Venezuela. He served as the Director of Culture in his hometown along with teaching at fine arts workshops all over Venezuela. Muzzarelli has created monumental works for the Cathedral of San Pedro in Caracas and opened his own gallery in Tinaquillo. Since immigrating to the United States, Muzzarelli has continued his artistic pursuits and has won awards and recognition while participating in exhibitions around the world.

The unveiling was attended by members of the community and City officials, including Mayor Dennis Raines; Councilman and Mauldin Cultural Council member Scott Crosby; City Administrator Brandon Madden; and Chamber of Commerce president Pat Pomeroy, who led a ribbon cutting in recognition of the piece.

“The issues that I choose are very optimistic and are almost always related to freedom, equality, the search for changes, the way to transform  negatives into positives,” said Muzzarelli during the unveiling ceremony. “In my artistic work the theme of butterflies is very frequent, so much so that in the country where I was born I am still known as ‘the painter of butterflies.’ For me, the butterfly represents freedom, continuous change, happiness.”

Muzzarelli’s proposal for his sculpture was to create a piece in which the figure of a child (representing youth) is shown with the cocoon of a butterfly, surrounded by many fully-grown butterflies. The rectangular framework in which the young boy rests represents the barriers that must be overcome by today’s youth.

“Youth, like a cocoon, carries with it all that potential energy necessary for change: the desire to fight, to transform, to face, to fly, to move forward,” Muzzarelli explained. “I hope that the character of the artwork achieves many other connotations. For example, the importance of living in a country like this, where young people have the possibility to choose their future, to select peace. And I mean this because Venezuela, the country where I was born, has been going through a terrible political and social crisis… that has cut the lives of many young people and the freedom of many others. Only education, work, culture, and well-established principles lead to freedom and peace.”

Four other sculptures line the Trail outside of the Mauldin Cultural Center. Each piece embodies a different theme that is voted on each year by the Mauldin Cultural Council, a non-profit that seeks to support the arts in Mauldin. Muzzarelli’s piece will join “The Depot” by Joey Manson; “Palmetto with Flowers” by Jamie von Herndon,  “We Are All One” by Yelitza Díaz Muzzarelli; and “The Groundbreaking” by Arrington Matthews.