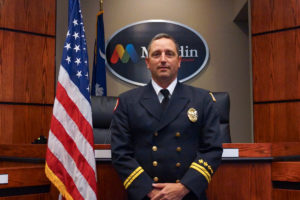 Mauldin City Council appointed Brian McHone to serve as the City’s Fire Chief during its August 17, 2020 meeting. Mr. McHone, who has served as interim Fire Chief since April 2020, replaces former Fire Chief Bill Stewart, who retired from the Fire Department after 35 years of service in the fire protection sector.

“Chief McHone is a public servant and leader with a wealth of experience in the fire service,” said Mayor Terry Merritt. “He has proven to be an effective leader as Interim Chief and has more than 25 years of frontline public safety expertise. I look forward to his continued service to this community,” said Mayor Merritt.

City Public Safety Committee Chairperson Carol King stated that the decision to appoint McHone as Fire Chief came after careful consideration. “The Fire Chief is an important position for the City as an organization and as a community,” said King. “I am confident that Chief McHone’s leadership style and fire service experience will be an asset to the Department,” King continued.

The City is excited to have McHone as the City Fire Chief. McHone, who is a member of the SC Fire Fighter Association, is a native of Laurens, SC. He is married to Terri McHone, and together they have two children. “I am honored to continue serving the City of Mauldin as the new Fire Chief,” stated McHone. “I am grateful and humbled to be appointed to this position. I’m a proud firefighter and excited to build upon on the many successes of the Department in serving the Mauldin community.”