Mauldin Youth Theatre to produce Once on This Island JR. November 4-13 at the Mauldin Cultural Center 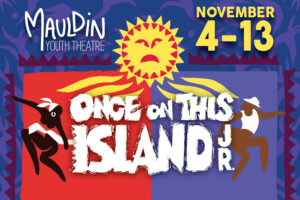 The Mauldin Youth Theatre is presenting their fall production, Once on This Island JR., on November 4-13 at the Mauldin Cultural Center!

Once on This Island is a coming-of-age musical, with book and lyrics by Lynn Ahrens and music by Stephen Flaherty (Anastasia, Rocky the Musical). It is based on the 1985 novel My Love, My Love; or, The Peasant Girl by Rosa Guy, a Caribbean-set retelling of Hans Christian Andersen’s fairy tale The Little Mermaid. This production will be directed by DeBryant Johnson with Assistant Director Meg Jones, and choreographed by Kristofer Parker.

Ti Moune, a peasant girl, makes a deal with the island gods to save the life of a wealthy boy, Daniel, from the other side of the island during a storm. She falls in love with him, but he returns home not knowing who she is. Though shunned for her lowly status, Ti Moune embarks on a quest to find Daniel, unaware that the gods have placed a bet on which element is stronger: love or death? Celebrate storytelling with this rousing Calypso-flavored tale of one small girl who finds love in a world of prejudice.

The original Broadway production ran from 1990 to 1991, and the West End production opened in 1994, where it won the 1995 Laurence Olivier Award for Best New Musical. The musical was revived on Broadway in a production that opened to critical acclaim from 2017 to 2019. Featuring Greenville native Phillip Boykin who portrayed the role of Tonton Julian, this revival won the 2018 Tony Award for Best Revival of a Musical.

Once on This Island JR. will run November 4-6 and November 11-13 at the Mauldin Cultural Center, with both matinee and evening shows. Tickets are $20 plus processing fees, or $15 for seniors, military, and students. A group rate of $10 per ticket is also available for groups of 10 or more; contact info@mauldinculturalcenter.org for more details. Tickets can be bought online at our.show/mauldincultural/onceonthisisland or by phone at 864.335.4862.

Following Once on This Island JR., the Mauldin Theatre Company will produce A Christmas Carol: the Musical, with music by Alan Menken (Beauty and the Beast, The Little Mermaid). The holiday season at the Mauldin Cultural Center will also feature a tree lighting and holiday market (A December to Remember, December 1 from 6-9 p.m.); the annual Christmas parade organized by the Mauldin Chamber of Commerce (from Mauldin High School to the Cultural Center on December 3, 2-4 p.m.); and the Mauldin City Singers’ winter choir concert (December 17-18, times vary).

The Mauldin Cultural Center hosts a variety of events, productions, and arts education classes throughout the year. Learn more at mauldinculturalcenter.org.