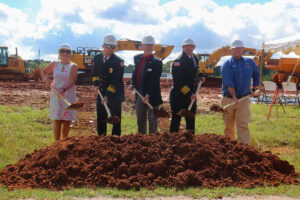 The City of Mauldin Fire Department celebrated the groundbreaking of its new headquarters on Plant Street off West Butler Road on May 27. City of Mauldin Mayor Terry Merritt, Fire Chief Brian McHone and Public Safety Committee Chairperson Carol King were among those in attendance.

“Our current station has served the City of Mauldin well but we’ve outgrown the facility,” said Fire Chief Brian McHone. “We are excited to create a space that provides us the ability to strengthen fire protection in a growing section of the City, increase efficiencies and improve our capabilities for the safety and security of our community.”

Designed by Stewart Cooper Newell Architects, the 18,000 square foot brick structure will replace the current station located next to Mauldin City Hall and will feature:

“We have been engaged in capital improvements for our Fire Department operations for the past several years with new equipment and fire apparatuses, plus adding new firefighter positions,” said Public Safety Committee Chairperson Carol King.  “The new Fire Station and Police Sub-Station is another step to improving overall emergency response times and providing excellent public safety services to every corner of our growing City and fire service area.”

City officials believe moving the new station about a mile west will allow the Department to better serve the growing population on all sides of the City. CloverLeaf Construction will build the new facility and anticipates it will take 12-14 months to complete.

“We are excited to celebrate with our residents and the Mauldin Fire Department who works so hard to keep our community safe,” said Mayor Terry Merritt.   “We are committed to providing resources that help us offer the best possible emergency service to protect our community.”

See photos from the groundbreaking on the City’s Facebook page.