By JR CharlesMarch 1, 2022No Comments 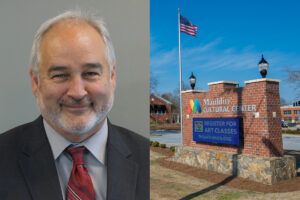 Van Broad, the Mauldin Community Development director who helped bring major projects like the burgeoning City Center and BridgeWay Station developments to the city, is stepping down.

His last day will be March 28. Broad said he is leaving the position for another opportunity in the Upstate but was not prepared to announce details.

Broad first came to Mauldin in 2015 after serving eight years as economic development director at Younts Center for the Performing Arts director in Fountain Inn.

He said his ability to expand the offerings of the Cultural Center with the help of his staff over the course of his roughly seven-year tenure is among his proudest achievements with the city. During his time heading the center, it added programming such as a summer beach music series, the Pizza Blues and Jazz Festival and a farmers market.

Mauldin’s continued investment in the facility has demonstrated local leadership’s willingness to improve the area, he said, and made convincing business owners to come to the city easier.

“It’s been wonderful for development and growth in the city,” he said. “Mauldin created the department of community of development so I could do that. I really wrote my own job description and tailored the department to go in the direction that I thought would be most advantageous to the city.”

In addition to the major commercial and mixed-use developments he helped shepherd, Broad said he takes pride in the annexation and residential growth he facilitated during his time in Mauldin.

“I know people don’t like traffic, but you can’t get retail and commercial development without it and that’s one of the struggles the city has had,” he said. “So that’s been a definite plus for the city.”

Councilman Taft Matney said Broad’s contribution over the past seven years have been vital. He was instrumental in bringing BridgeWay Station, a $150 million development taking shape just off of Interstate 385, into the city limits, Matney said, and played a central part in getting the first phase of the City Center project off the ground. Broad also spearheaded efforts to establish Mill Port, the development off of East Butler Road that houses a Marriott hotel, J. Peters Bar and Grill and a BB&T bank.

“Van’s contributions to the city have been invaluable and immeasurable,” Matney said.

The process to find Broad’s replacement has not yet begun. Matney said he will take on some of the economic development responsibilities on pending projects in the interim.

In his final month as Mauldin’s community development director, Broad said he plans to work with staff to help the city transition.

“Mauldin is perhaps one of the most generous, gracious communities I’ve ever been a part of,” he said. “It’s been crazy exciting and there’s nothing but good days ahead for the city.”

Read the full article by Conor Hughes at the Post and Courier.